Today at the Open Hardware Summit OSHWA launched version 2.0 of the open source hardware certification program. We have a new website, a new directory, and lots of new resources for learning about open source hardware. You should really check it out. 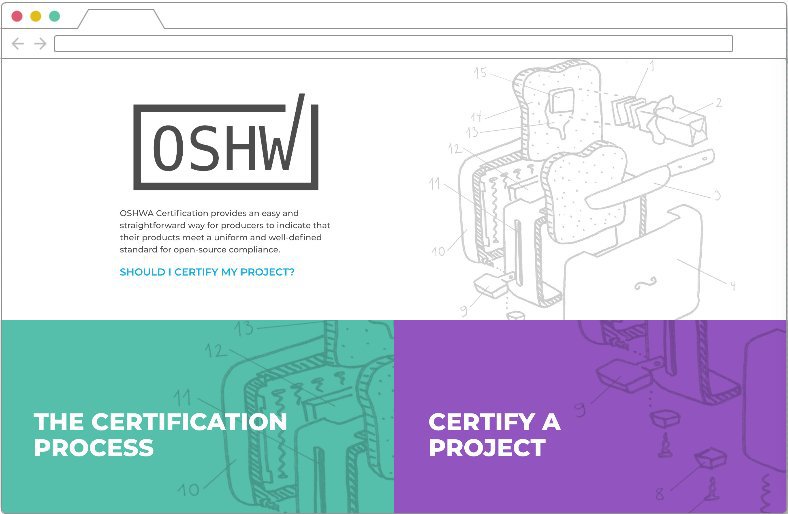 We announced our intention to create this new version of the certification back in March. Since then we have been working in consultation with the board and the community to develop a new version of the site. Version 2 of the certification site uses specific examples from the community to illustrate best practices and licensing decisions for creators of open source hardware.

With that being said, there is always room for improvement. In addition to the community, with the support of the Alfred P. Sloan Foundation we have been working with the Technology Law and Policy Clinic at NYU Law and the design team at Objectively think through the best way to make version 2 work for everyone.

Besides overhauling the look and feel of the site (embedding google docs in wordpress pages helped us get the program up and running quickly, but that approach admittedly comes with some design limitations), OSHWA had three primary goals for the the new website:

Since its founding, OSHWA has created a series of fantastic resources such as best practices and FAQs to help the community develop open hardware. Each of these resources was developed in response to specific concerns, building up on existing resources and expanding explanations.

One side effect of that development history is that resources sometimes contained overlapping information that did not completely align. It could also be hard to know exactly where to go to find a specific answer.

The new certification site borrows from the previously-developed resources and consolidates them into a unified presentation. OSHWA has worked hard to create paths that are helpful for new members of the community just getting up to speed and existing members who want to take a deeper dive into something specific. The new site allows you to skim along the top of information related to open source hardware and then immerse yourself in information when something catches your eye.

There is no getting around the fact that licensing open source hardware is more complicated than licensing open source software. There are multiple elements to consider (hardware, software, documentation, etc.), multiple types of intellectual property at play, and some ambiguity around what is even protectable.

For the first time, OSHWA is providing specific guidance on licensing. That guidance comes in two forms.

First, OSHWA recommends explicitly and individually licensing hardware, software, and documentation associated with a piece of certified hardware. This will bring true clarity to future users. The certification application now requires you to specify a license for each of these elements.

Second, OSHWA recommends specific licenses for each of those elements. These recommendations are not exclusive, and OSHWA is happy to consider adding additional licenses as they are developed or as the community requests. The recommended licences were chosen in an attempt to make it easy to pick a license that works for you. This process is further simplified by providing examples of existing certified hardware that use a given license. That means that users who are not sure which license to use can simply follow in the path of other hardware creators that they trust.

The first version of the certification directory was a google spreadsheet embedded in a web page. That made it easy to get certified hardware listed online. It made it hard to actually explore the directory.

The new certification directory fundamentally redesigns the user experience. It is now easy to find hardware, search by features, and drill down into what is really available. We hope that this makes the directory a much more useful resource for the community.

Version 2 is the newest version of the certification process, but it does not have to be the last. Play around with it, certify something, and let us know what you think. If you have ideas for features or information, or licenses you think we missed, please let us know in the forums.