Afinia pushes back in a lawsuit that could impact the entire desktop 3D printing industry. 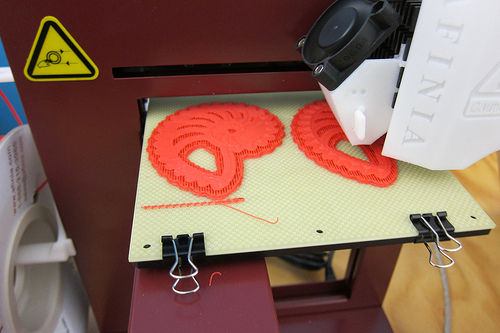 When the original complaint was filed we summarized it here.  Today, this post will summarize Afinia’s response to that complaint.

As with Stratasys’ complaint, it is important to include a quick caveat when thinking about Afinia’s response.  Afinia’s response is written by Afinia’s attorneys and is designed to present all of the facts in a light as beneficial to Afinia as possible.  That doesn’t mean that there is anything untrue in the response, but it does mean that any claims made in the response should be taken with a grain of salt.  That being said, as with the earlier analysis of the Stratasys complaint, in an attempt to explain what is going on this post will more or less take Afinia’s claims at face value.

The short version is that Afinia challenges the validity of all four of the patents that Stratasys accuses them of infringing.  This goes beyond simply asking the court to decide that Afinia does not infringe on any of the Stratasys patents (although Afinia does do that).  Afinia is also asking the court to find Stratasys’ patents totally invalid, which would prevent Stratasys from asserting them against anyone else.  In light of Afinia’s belief that Stratasys’ patents are invalid, Afinia also accuses Stratasys of using this lawsuit and its patents to try and monopolize the 3D printing market.

For a quick overview of the ‘925 patent and the rest of the patents at issue, take a look at thesummary of Stratasys’ complaint.  The ‘925 patent allegedly covers controlling the infill of an object being printed.  To understand how Afinia is challenging the patent, it is important to understand a bit of how the patent application process works.

In many ways, a patent application is more like the opening position in a negotiation.  The applicant submits an application.  The patent examiner at the Patent and Trademark Office examines it and searches for prior art, which would show that the proposed invention is not actually new (and therefore not patentable).  If the examiner finds prior art, the applicant often revises the application to distinguish it from the prior art and/or explains to the examiner why the existing application is different from the prior art.  Some of this back-and-forth (although not enough of it) is done in writing.

Afinia looked into this written record to find evidence of ways that Stratasys narrowed the scope of its patent in order to get it accepted.  Afinia asserts that this record is evidence that Stratasys narrowed the ‘925 patent to the point where it no longer includes what Afinia is doing.  This narrowing was especially important to distinguish the application from existing patents5,490,962 and 5,518,680.  Afinia especially highlights the ‘680  patent.  Additionally, Afinia points to patent 5,121,329 as being prior art including what Stratasys is claiming in its ‘925 patent.

Afinia ends its response to the ‘925 patent infringement claim by accusing Stratasys of asserting this patent in an attempt to monopolize the 3D printing market.  This final claim is included in Afinia’s response to all four patents.

The ‘058 patent allegedly covers the heated build platform that is used by most desktop 3D printers.  In its response, Afinia includes the high degree of detail included in Stratasys’ patent.  As with the ‘925 patent, much of this detail is presumably included in order to distinguish this patent application from prior applications.  Every detail narrows the scope of what is protected by the patent.

This patent allegedly covers Afinia’s extruder.  Here, Afinia looks at the patent and determines that it requires a tube with a wall between 0.005 and 0.015 inches thick that passes through a heating element.  Since Afinia uses a tube that is four times thicker than that requirement, Afinia asserts that the patent simply does not apply to them.

It is worth noting that the 0.005-0.015 sizing requirement appears to be derived from interpreting a combination of elements in the patent, and does not explicitly appear in the patent.  This does not necessarily mean that a court would or would not agree that the patent includes the requirement, but the ambiguity is worth flagging.

Finally, the ‘239 patent allegedly covers a process for concealing the seams that can appear because of the layering technique used in 3D printing.

Afinia again looks to Stratasys’ attempts to distinguish its patent from prior art.  Armed with this record, Afinia asserts that the technique used by its printer and software lacks some of the elements required in the ‘239 patent.  Specifically, the lack of start and stop points allegedly keeps it outside of the scope of the patent.

In addition to responding to Stratasys’s claims, Afinia makes some claims of its own.  The first is to request that the court declare that Afinia is not infringing on any of Stratasys’ patents.  Afinia requests that this declaration – called a “declaratory judgment” – apply both to Stratasys’ claims of direct patent infringement and the allegations of secondary infringement.

The second request is likely more interesting to the broader 3D printing industry and community.  Afinia asks the court to issue a declaratory judgment that the patents themselves are invalid.  This would go beyond merely finding that Afinia does not infringe on these patents.  Instead, it would mean that the patents themselves are invalid.  If granted, invalidating the patents would prevent Stratasys from accusing anyone of infringing upon them.

What Do We Know Now?

The most important thing that we know now is that Afinia is taking steps to really fight this lawsuit.  As mentioned in the summary of Stratasys’ complaint, this lawsuit is important well beyond the fate of Afinia.  If Stratasys is correct that it has patents that cover most desktop 3D printers, they will have significant control over the fate of the industry.  Since Stratasys purchased desktop 3D printer manufacturer Makerbot last year, this type of control could make it much harder to launch new printers.

Afinia hired a law firm to respond to this complaint, and clearly bankrolled a reasonably expansive search for prior art.  This is a strong alternative to immediately settling with Stratasys.  It is the kind of thing that a company does when it decides to fight a lawsuit instead of settle, and is encouraging.

We also now know where Afinia is looking for prior art.  This should help the larger 3D printing industry and community think about how to address these patents.  The more eyes on the patents put forward by Afinia, the better the chances are of finding additional prior art.  If you are familiar with the operations of 3D printers, take a look at the patents linked to above.  And also look at Afinia’s response, especially paragraphs 82-84, 87, 90, 95, 97, 109, and 124.

What Do We Not Know Now?

Unfortunately, we have no idea how long Afinia will be willing or able to fight this lawsuit.  Patent infringement lawsuits are very expensive propositions, and the option to settle is always there.  There is nothing to suggest that Afinia has any plans not to see this thing through to the end, but the truth is that you never know.

Perhaps more importantly, we also do not know how strong Afinia’s legal arguments are.  When we only had the Stratasys complaint, it looked like Stratasys had four patents that covered the Afinia printer.  Now we have Afinia’s response that makes it look like none of Stratasys’ patents cover the Afinia printer (or are even valid).  Going forward, the arguments of both sides will be tested.  Hopefully that process will give everyone a better sense of the patent landscape.

Finally, we still don’t know what impact this lawsuit will have on the larger 3D printing industry and community.  We (or at least I) don’t know if Stratasys is reaching out to other companies in an attempt to get them to license this patent portfolio, or is Stratasys would even be interesting in licensing this portfolio to anyone else if they win in court.  If other companies are getting those inquiries, we don’t know how those other companies are responding.  The mere existence of this lawsuit may be enough to chill development, but development may simply be churning on in spite of it.  As frustrating as it is, it will simply take time to figure it all out.

Of course, I’m headed to CES next week where it looks like there will be lots of 3D printers on display.  Kickstarter is chock-a-block full of new printers.  And amazing work is going on in the open source development community every day.  So the good news is that this lawsuit hasn’t stopped everything.  At least not yet.

*This post originally appeared on both the [Engelberg Center](https://www.law.nyu.edu/centers/engelberg/news/2020-10-20-open-source-hardw...… Continue reading

Simulating Firefly Flashes with CircuitPython and Neopixels (Now with Classes!)