It is a problem when Verizon’s decisions prevent subscribers from having a good Netflix experience. But the bigger problem may be the FCC’s ignorance about the underlying dispute. 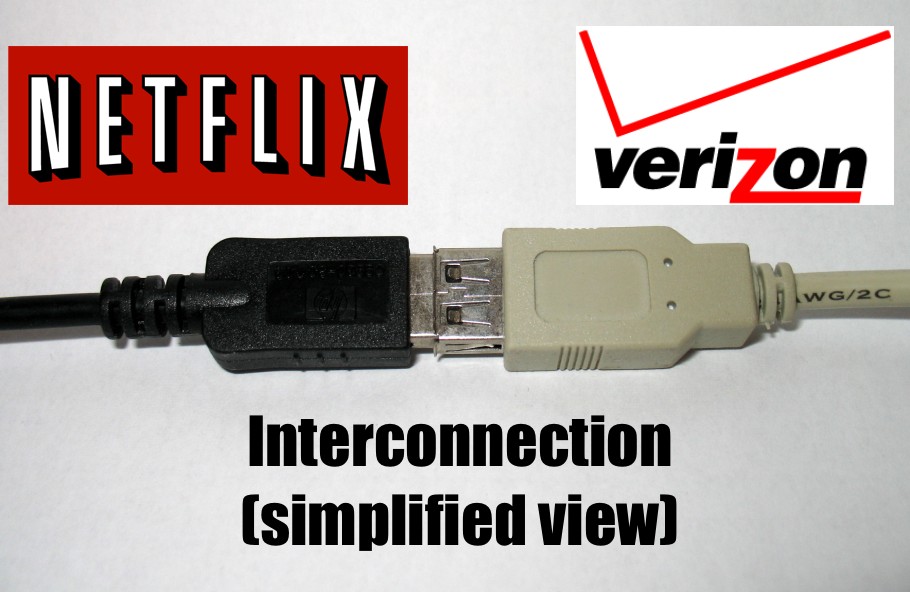 Today brings us another round in what has been something of a long-simmering fight between Netflix and Verizon.  This morning, David Raphael posted awriteup of his interactions with his ISP Verizon.  In it he documents how his Netflix streaming quality has become “awful compared to just a few weeks ago.”  After some investigation, Mr. Raphael traced the problem back to the Amazon commercial cloud service used by Netflix.  When he confronted a Verizon customer representative, the representative “admitted” that Verizon is limiting bandwidth from cloud services.

What to make of all this?  First of all, while hugely problematic and growing in importance, this issue is not new and is probably not directly connected to the recent Open Internet decision.  As John Bergmayer pointed out in a blog post last June, there has been a brewing interconnection problem between Netflix and Verizon for some time.

As John pointed out, it is an ISP’s job to deliver traffic to their customers.  That is what they get paid to do.  And part of doing that job is investing in the facilities required to deliver customers the content that they want.  An abstractly fast internet connection is all well and good, but if it is slow in getting you the content you want the headline number doesn’t matter very much.

This problem is also thematically similar to net neutrality.  There are some possible policy distinctions (again, neatly summarized by John last summer) but at a consumer level the policy distinctions start to slip away.  For a consumer, the reality is that decisions made by her ISP prevent her from accessing the service of her choice.

Even those who are inclined to seek a market solution to this problem should be concerned.  Let’s assume, at least for the sake of argument, that consumers have a number of ISPs to choose from.  In situations like this, it is very hard for the average consumer to figure out if switching ISPs would even help.  Without network engineering skills like Mr. Raphael’s it can be very hard to tell what the problem is.  Is it the ISP?  Is it Netflix?  Is it something else entirely?  Without an easy way to assign blame for the awful picture, how is a consumer supposed to know which part of the equation to switch?

The same opacity also creates a disincentive for either Verizon or Netflix to invest in solving this problem.  If customers are not sure who to blame, it is unlikely that they will know who to reward for the investment that fixes the problem.  Transparency about business and technical practices won’t solve any underlying competition problems.  But, more information would at least help us get a handle on exactly what is going wrong.

Verizon Has an Incentive to Slow Netflix

Thus far, everything in this post could apply to any ISP.  But Verizon has two additional features that make its behavior even more worthy of a second look.  First, Verizon also sells a cable television package.  Second, Verizon owns Redbox, an online video streaming service.

On at least some level, both of these services compete with Netflix.  That gives Verizon, the company that controls the connections that Netflix relies upon to reach Netflix’s subscribers, a huge incentive to make Netflix work not so well.  Every mediocre Netflix experience is one more reason to stay within the Verizon universe.  In light of that, any problems that Netflix customers have on Verizon (or any ISP that also has a TV offering) deserves extra scrutiny.

Where is the FCC?

But what is really going on here?  It can be hard to say from the outside.  This type of interconnection problem has been brewing for some time, and all indications are that they will continue to assert themselves.  With that, interconnection issues start to feel a lot like data caps: net neutrality-related but also bigger than net neutrality, huge impact on services that compete with ISP video offerings, potential technical justifications that are hard for outsiders to evaluate.

But the biggest similarity is that the FCC has essentially ignored both of these issues. One might think that an issue as big as interconnection would warrant some sort of FCC attention.  Even investigating interconnection enough to be able to figure out how to apportion blame for this sort of problem would be a huge step forward.  But, thus far, we have seen nothing from the FCC.  Chairman Wheeler has expressed interest in taking hard looks at how ISPs are handling their network traffic but thus far not actually acted to do so.

This is the most recent manifestation of an interconnection problem, but it will not be the last. If the FCC wants to take its role protecting an open internet seriously, it would be well served to begin educating itself about what is actually happening.

A recent kerfuffle around an open source software creator asking for their package not to be included in a larger project has turned into...… Continue reading