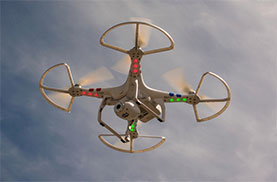 This article was originally published on Makezine.com.

Last month, 3Dprintler.com ran a blog post about “Canada’s First STL IP Infringement Case.” I can’t say if it was the first STL infringement case in Canada, or even if there was any infringement under Canadian law. However, this case provides a good opportunity to examine some of the principles related to digital files, 3D printing, and intellectual property from a U.S. legal perspective. At Public Knowledge I’ve been writing about these topics for years.

To contextualize this situation for Make: magazine’s United States readers, I’ll analyze this case as if it happened in the U.S. and was subject to U.S. law.

The story itself is fairly straightforward.  Michael Golubev, the post’s author, put up some files for parts to a quadcopter (a type of remote control helicopter) on the sharing website Thingiverse.  Those files were licensed under a Creative Commons Attribution – Non Commerciallicense.  At some point, the parts appeared for sale on CanadaDrones.com, apparently in violation of both the attribution and the non-commercial requirement of Golubev’s license. Golubev felt that his intellectual property rights were being infringed and sued CanadaDrones.com. The suit was quickly settled, with the parts being taken down from CanadaDrones.com and the individual responsible for the sale removed from his position.

A Bit of Background

Before getting into an analysis of what actually happened here, it is important to flesh out a bit of background. First, what are we even talking about? An STL file is the commonly accepted file format for 3D printed objects. It is something akin to a PDF file for objects — more or less universally accepted, and also something of a pain to work with. In this case the file in question represents parts for a quadcopter.

Second, when thinking about 3D printing and intellectual property law it is critical to keep in mind that you are often working with two separate elements: the object and the file. This can be confusing, but it is important to understand. In many traditional copyright cases, there isn’t really a distinction between the file and protected work. When you write a novel or take a picture, the novel or picture only really exists as the file so you can treat them as the same thing. That novel or picture does not exist outside of the file.

This is not really the case with 3D printed objects. In the world of 3D printing, the file and the object are distinct. This distinction becomes important because intellectual property law may treat the object and the file that represents the object completely differently.

Third, the distinction between copyright and patent is also going to come into play here. Briefly, copyright protects creative (nonfunctional) works. That protection attaches automatically the moment the work is created. In contrast, patent protects functional objects. Unlike copyright’s automatic protection, you need to apply to get a patent.

With that bit of background, we can take a closer look at what happened here.

Golubev’s parts, not his STL file, is what was being sold on CanadaDrones.com. When Golubev saw the part for sale without permission, he assumed his intellectual property rights were being violated and sued. But (and again, this entire exercise is using U.S. law so it may not actually apply in Canada) it is not entirely clear that Golubev had any intellectual property rights to the object.

The part in question is a bracket to mount a video transmitter. To that end, it is pretty close to a perfect example of a “functional” object. It is designed to perform a specific task (mount a transmitter), and its design is dictated by the practical requirements of attaching the transmitter to the quadcopter.

As such, we can be pretty sure that it falls outside of the scope of copyright protection. The mount may be protectable by patent, but there is no evidence that Golubev applied for or received patent protection for his bracket.

The result? It is likely that the bracket is not protected by any sort of intellectual property right at all. This means that no one needs permission from Golubev to copy, improve, or build upon the bracket. It could be sold far and wide without permission. For the object itself, Golubev’s Creative Commons license is irrelevant. CanadaDrones.com did not need Golubev’s permission to produce the bracket, and did nothing (legally) wrong when it decided to do so. Golubev may not have approved of CanadaDrones.com’s decision to reproduce and sell the mount he designed, but that did not give him a legal right to stop them.

This is a big change for anyone who is coming from a world of code, photographs, movies, and music — all things that are protected by copyright. Once you are in the world of functional, physical objects, you can no longer simply assume that there is some type of intellectual property protecting everything.

If we were just talking about the object, this would pretty much be the end of the analysis. But, remember, with 3D printing we are often talking about two distinct elements — the object and the file. And in this case, the file complicates things a bit.

If the file is protected by copyright, then CanadaDrones.com would need permission to make copies of it. In this case, Golubev gave CanadaDrones.com and everyone else permission to make copies, as long as they did so noncommercially and attributed the design to him (that’s what that Creative Commons license was doing). If CanadaDrones.com made copies of the file (say, by downloading it or copying it to various printers), they could be violating Golubev’s copyright in the file, even if they were not violating any rights in the physical object itself.

Of course, because nothing is ever easy, this part of the analysis is subject to two additional caveats (sorry about that). First, this only applies to the file itself. If CanadaDrones.com managed to reverse engineer the mount without copying Golubev’s file, there is no infringement because they would not have copied the file itself.

Second, and this is the more complicated one, it may very well be that while code is generally protectable by copyright, the code that simply represents an object is not protectable by copyright.  This possibility is explained in a bit more detail on pages 14-19 of this whitepaper. The short version is that if the only way to represent the physical object digitally is with code that looks an awful lot like Golubev’s, Golubev’s STL file does not get copyright protection at all.  And if the file is not protected by copyright, copying it without permission is not infringement.

At the risk of complicating things further, there is one other element to flag here. As part of Golubev’s Thingiverse page for the mount, he took pictures to give people a sense of how the mount looked and provide a bit of context for its use.

Those pictures are pretty clearly protected by copyright, and CanadaDrones.com’s use of it without permission is straightforward copyright infringement. We could ask if Golubev had permission to use some of the images incorporated into his picture (or if he would even need permission to do so), but let’s just ignore that for now.

This leaves us in an interesting place. It is a pretty safe bet that CanadaDrones.com did not violate any intellectual property rights by copying the physical object. And it is a debatable proposition if they violated any intellectual property rights by copying the file. Setting aside the use of the picture, Golubev’s claims of infringement are not a slam dunk. When Golubev sued, did CanadaDrones.com push back?

Fortunately, the answer is no. Instead of getting caught up in the legal technicalities and taking this to court, CanadaDrones.com quickly negotiated a settlement with Golubev. The settlement was a reasonable one. CanadaDrones.com paid the fees that Golubev incurred when he filed the suit, mailed him a letter of apology for the incident, and fired the employee responsible for taking the object in the first place.

It may be that a letter would have achieved the same thing as a lawsuit, but as an outcome this feels like a strong one. CanadaDrones.com avoided paying for a lawsuit and all of the bad publicity that would have accompanied it. Golubev got his mount removed and an apology. Everyone walked away happy, regardless of the legal merits of the case.

As a standalone case, it is good to see it resolved amicably and with minimal legal intervention. But as a case study, it is also helpful in thinking about how intellectual property and infringement fit in with the world of 3D printing.

If nothing else, hopefully this example illustrates that throwing around terms like “infringement” in the 3D printing context is somewhat more complicated than music or movies. This is a complex area, made all the more so because so many of us learned everything we know about infringement in the more cut-and-dry world of copyright.

Going forward, we will all end up figuring this out together. But for now, it will be important to remember that just because something is copied does not mean it is infringing. While that can be disconcerting, it can also be a great opportunity. After all, it serves as a reminder that the physical world is full of things for you to copy, build upon, and improve without permission. And that is a great opportunity for everyone.