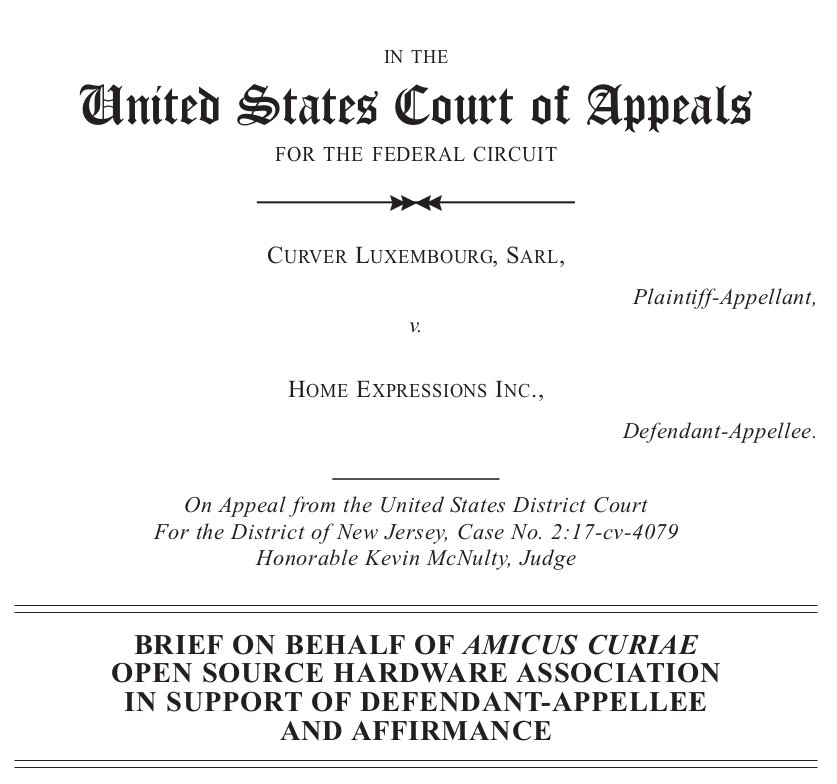 OSHWA has just filed an amicus brief in a case regarding design patents. OSHWA urged the court to uphold a rule that a design patent covers only what the patent itself says it covers. This rule allows everyone to understand what is and is not protected by a design patent. A clear understanding of the scope of design patent protection is particularly important for open source hardware creators who share their design files for use and modification by others because they need to know when a patent would – and would not – apply to their design.

The case in U.S. court, called Curver Luxembourg SARL v. Home Expressions, Inc., is actually about furniture patterns. Curver applied for a design patent on a wicker pattern similar to one found in ancient Islamic designs. The pattern looks like this: 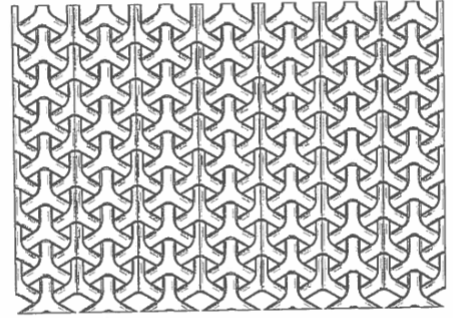 Design patents don’t protect abstract designs as represented in all things at all times. (Copyrights do that.) When you apply for a design patent you need to identify the “article of manufacture,” the actual thing that embodies the design. Curver initially failed to identify the thing that embodies the design, but eventually identified a “pattern for a chair.”

Curver’s designation of a “pattern for a chair” is important for what comes next. Another houseware manufacturer, Home Expressions, started selling a basket with a wicker pattern similar to Curver’s. Curver accused Home Expressions of infringing on Curver’s design patent. Curver believes that now that its patent for a “pattern for a chair” has been issued, the patent should be interpreted much more broadly to cover baskets, or any other object embodying the wicker design.

From OSHWA’s standpoint, it does not really matter if the patterns on Curver’s and Home Expressions’ baskets are the same or not. What is important is that Curver’s patent is for the design embodied in chairs and baskets are not chairs (this is a hill I am potentially willing to die on). Curver should not be able to select arbitrarily or strategically the thing that embodies its design in order to get the patent, and then turn around and apply the patent well beyond the scope of that selection in the real world. Our brief asks the court to adopt a rule preventing that kind of behavior.

Regardless of what you think about the design patent system more broadly (and there are many opinions about it in the open source hardware community), the system can work only if patents give notice of what they cover. The “article of manufacture” (in this case, a chair) is essential to providing that notice because it shows how an otherwise abstract design applies to a particular object. It also places a reasonable limit on the scope of a design patent’s protection. Home Expressions should have been able to confidently ignore a chair-based patent in designing their basket.

This is important to the open source hardware community in at least two ways. First, creators cannot avoid infringing on existing patents if they do not have a way to understand what those patents do and do not cover. The patent system works only if people can figure out from patents themselves what those patents cover. This is important for maintaining a healthy environment for open source hardware creators to share design files with others without exposing themselves or other creators to unknown risks.

Curver actually took the fairly unusual step of opposing our request to file our amicus brief. Fortunately, the court recognized that the open source hardware community could be impacted by the decision in this case and denied Curver’s attempt to keep us out.

OSHWA will continue to keep an eye on this case and provide updates as they develop. We would also like to say a big thank you to Kyle McLorg, George Laiolo, Erik Stallman, and Jennifer Urban at the Samuelson Law, Technology, & Public Policy Clinic at Berkeley Law for representing OSHWA in this case. They drafted the original brief, as well as the argument that convinced the court to accept it over Curver’s objections.