One good, one bad, and one undetermined thing about the world view of book publishers. 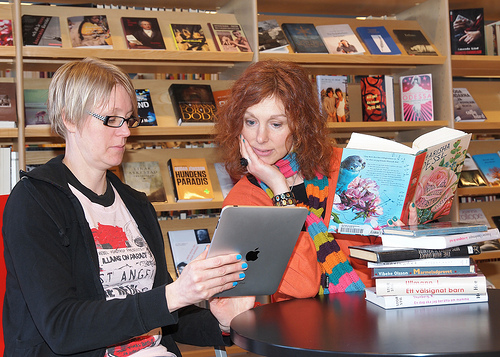 Yesterday, a federal court found Apple guilty of antitrust violations in connection with the creation of its digital bookstore. The decision is full of interesting information about antitrust law and emerging markets. But in addition to that, the opinion – drawing on internal emails and in-court testimony – offers a compelling description of how publishers see their world.

At least three things jump out:

1. Everyone at the Top Understands That There is a Relationship Between Availability and Piracy

On an abstract level, this point will come as no surprise to regular readers of this blog or anyone involved in discussions around digital copyright for the past decade or so.  Digital locks do not combat piracy.  Suing your customers does not combat piracy.  The best – and really only – way to combat piracy is to offer the public an easy way to buy your products at a reasonable price.

While this passes for common knowledge in many places, the opinion makes it clear that the people at the highest level of Apple (less surprising) and the publishing houses (more surprising) recognize the connection as well.  The CEO of Macmillan described windowing – the practice of delaying the release of e-books for weeks or months after the physical version was released – as “really bad” because it encouraged piracy.  The CEO of Penguin called windowing “entirely stupid” and admitted that it “actually makes no damn sense at all really.”  An internal Penguin study showed that the sales of a windowed e-book never recovered – if a book was delayed people simply didn’t buy it.  Macmillan and Random House also called windowing “a terrible, self-destructive idea.”

Steve Jobs pushed the publishers on this point, telling one executive “Without a way for customers to buy your ebooks, they will steal them.  This will be the start of piracy and once started there will be no stopping it.”

While no one would argue that major publishers have fully come to terms with this lesson (see, e.g. the fact that they self-destructively hold onto DRM), it is encouraging that they are at least aware enough of it to discuss it.

2. Publishers Have Not Come to Terms with Pricing Digital Goods

At least on some level, this tension could flow from each side’s relative comfort with the idea of digital marketplaces.  Apple has been running iTunes and its app store for years and recognizes that increased prices can reduce sales and ultimately lead to lower profits.  While this is true in every market – be they physical or digital – that operates according to fundamental economic principles, it can be exacerbated in digital markets.  Unlike with physical books, there is essentially no marginal cost to producing an extra e-book.  Even better, those e-books don’t even come into existence until someone has purchased them.  With their rush to increase prices as much as Apple would let them and their concern about protecting the “perceived value” of books among the public, publishers seem unable to consider the fact that lower prices could increase their profits in the long term.

3. Publishers Are Very Concerned About Protecting Their Existing Physical Market

Depending on how you view the future of publishing, this is either savvy or short-sighted.  If you assume that book publishing is going the way of music and movies before it – away from physical products and towards digital downloads – this concern about protecting the hardcover market reads as self-destructive.  Don’t hobble the future to protect the past – you will just end up killing both!

On the other hand, if you think books are different, it can feel much more reasonable.  If the future of books is a world where physical books exist side-by-side with e-books, it makes sense not to undermine the physical market for the sake of the digital one.  That future may require a more thoughtful consideration of the relationship between physical and digital beyond “digital is 20% cheaper,” but we are still in early days.  All this means that while the first two lessons are fairly easy to place, this one could end up being the most interesting.