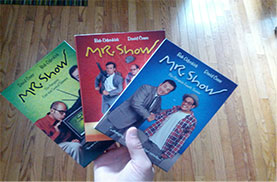 A story over at the Awl about HBO trying to erase its past provides another stark reminder of the importance of ownership – real ownership – in a world full of digital downloads and streaming.

We’ve been talking about digital ownership and digital first sale for a while – PK VP of Legal Affairs Sherwin Siy wrote an entire whitepaper about it.  Fundamentally, digital ownership is important because increasingly when you “buy” a digital thing online you don’t really own it.  Instead, you click through some long terms of service agreement and “license” it.  That distinction matters – if you are licensing something you are not really buying it, and if you are not really buying it you don’t really own it.

Non-ownership plays itself out in all sorts of ways.  Because you don’t own those digital goods, you may not be able to lend them to someone else, or resell them, or even pass them on to your heirs when you die.  Similarly, because you are only leasing them, rightsholders can reach out after the “sale” and simply make the files disappear.

This non-ownership also means that it is easier for rightsholders to rewrite history, which brings us to Mr. Show – one of early HBO’s classic sketch comedy shows – and HBO Go – HBO’s on-demand streaming service.

Regardless of the motivations behind HBO’s editing, it paints a somewhat disturbing picture of the future in an all-streaming world.  When you are only renting something, the rightsholder can take it away and make it disappear at any time for any reason.  That gives them the power to alter their own history.

This may be most vividly illustrated by the fate of Mr. Show.  As Mr. Show’s creators point out at pretty much any opportunity, HBO hates Mr. Show.  Perhaps as a result, Mr. Show is not available on HBO Go.  Fortunately, Mr. Show is available on DVD, which means it is actually available to really purchase and to really be owned by the public.  This availability for actual purchase means that even if HBO were to try and bury Mr. Show, it would still be available in physical, owned copies that could be legally lent, sold, or passed down to heirs as their owners saw fit.

That user control stands in stark contrast to a world where everything is leased and nothing is owned.  If shows have only been streamed or leased through digital stores, the rightsholder will always have the ability to make them (or at least legal copies of them) disappear.

None of this means that we should be stuck in a physical-only world.  The solution to non-ownership is not to mandate everything be released on DVD or some other physical format.  Instead, the solution lies in recognizing the ways that streaming and leasing impact the balance at the core of copyright and look for ways to restore that balance.  Keeping up with technological advancements should not require everyone to give up rights that are basic to the copyright bargain.  And the worst thing would be to give up those rights without realizing it until they are already long gone.  At that point, we may not even remember what we have lost.