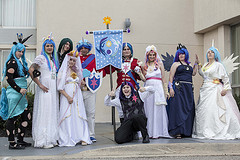 Yesterday Shapeways (the 3D printing company) andHasbro (the company that makes My Little Pony, among other things) announced a new website calledSuperFanArt.  The site allows fans outside of Hasbro to create and sell their own My Little Pony characters and creations.  It especially draws on the Brony My Little Pony fan community (more on Bronies in text form here and video form here).  This is the latest encouraging sign that rightsholders are interested in learning lessons from the past decade.  By inviting fans to build off of My Little Pony shows and create – and even sell – new characters, Hasbro is partnering with their fans instead of suing them.

Broadly speaking, the music industry responded to the internet in three (sometimes overlapping) phases.  The first was to try and sue its consumers and (in some ways) the technology itself to try and prevent the change from happening.  That approach didn’t work.  It was wildly expensive and helped to alienate a generation of potential customers, but did not stop the change in the industry.

The second was to try and lock down music with elaborate digital rights management (DRM) designed to make it hard to copy music files.  For better or worse, that didn’t work either.  Infringers were able to defeat the digital locks, but the locks prevented legal customers from making legitimate uses of the files they had purchased.

Finally, the music industry decided to find a way to meet the public demand for music by making it easy to legitimately purchase music and by licensing online music services.  This has been its most successful response.  While there are still plenty of ways the music industry can do better – especially on the licensing front, where a handful of mega-companies tend to slow down innovation – generally speaking this “give people a way to pay you for what they want” approach to disruption has been the most successful.

Why is this history important?  The challenge for industries that may be disrupted by 3D printing is to find a way to skip phases one and two (“sue customers” and “try to create fancy digital locks,” respectively), and move directly to phase three (“let people pay you”).  This is obviously easier said than done, but history suggests it is the key to making it through disruption.

By partnering with SuperFanArt, Hasbro appears to have jumped right to phase three.  There was clearly a community of, well, super fans interested in creating new My Little Pony characters and generally extending the My Little Pony Universe.  Many of these types of fan works are likelyprotected by fair use.  But creating and selling My Little Pony figurines is something that, at a minimum, Hasbro could have tied up in lawsuits for years.

To its credit, Hasbro decided not to sue this community of super fans.  Instead, they found a way to give them a license to create and profit from their creations.  Creators on SuperFanArt can now confidently sell fully licensed versions of their works.  The community gets the ability to thrive, Hasbro gets to build good will (and, presumably, a cut of sales), and no one gets sued.  As HBO proved last year, there was nothing inevitable about Hasbro going this way.

Is This A Model?

Obviously, it is too early to know if this will be successful.  The details of the license involved will matter, as will the reaction of the artists involved and the larger Brony community.  That being said, when compared to the ways in which other industries have responded to disruption this is an encouraging development worth monitoring.