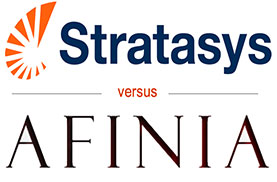 As you may recall, back in November Stratasys (the company that owns MakerBot) sued Microboards Technology, LLC (the company that makes the Afiniadesktop 3D printer) for patent infringement. Specifically, Stratasys accused Afinia of violating four of its patents.

This case is important beyond the fates of Stratasys and Afinia because the Stratasys patents could potentially cover many more desktop 3D printers. Last month, the court directed Stratasys to dismiss the accusation of infringement in relation to the patent that was related to controlling infill. In short, that means that one of the four patents from the complaint (the one that covers infill) is no longer in play. Furthermore, it is still possible that the patent could be invalidated entirely.

In response to that complaint, Afinia generally challenged the validity of all four patents andaccused Stratasys of abusing the patent system to try and monopolize the 3D printing market. The challenges to each of the patents were fact-specific, but this post will focus on the ‘925 patent because that is the one that was directed to be dismissed.

Discovery of Prior Art – And Old Stratasys Patent

As part of its response, Afinia claimed to have found an example of prior art that should have prevented Stratasys from getting the ‘925 patent in the first place. But this wasn’t just any prior art. Afinia claimed that Stratasys itself already had a patent that included the invention that was being patented (again?) by Stratasys. That old patent should have prevented the ‘925 patent from ever being granted.

Afinia didn’t stop there. If an old patent really did include the parts of what became the ‘925 patent, that would be enough to invalidate the ‘925 patent. However, the old patent isn’t just an old patent. It is Stratasys’ old patent. As such, Stratasys probably knew about it (or should have known about it) when it was filing the application for what became the ‘925 patent. Afinia claimed that withholding this information from the Patent Office constituted inequitable conduct and patent misuse. Essentially, Afinia was saying that Stratasys had a duty to tell the Patent Office about its old patent – and that failing to do so was a breach of good faith.

Soon thereafter, both Stratasys and Afinia sent short (2 page) letters to the Court explaining why Stratasys’ decision to voluntarily dismiss the infringement claims should or should not also require Afinia to withdraw the counterclaims.

Afinia responded that even if Stratasys withdrew the infringement claim, Afinia wanted to keep its counterclaims because 1) Afinia was worried that Stratasys could use the patent against them in the future (just because Stratasys withdraws the claim of infringement against this Afinia printer doesn’t mean that Stratasys couldn’t use it against a new printer – or a new defendant – in the future), 2) Afinia thought that exploring what happened with the ‘925 patent could help them uncover similar problems with the ‘058 patent, and 3) they want to recover all of the attorney fees that have been billed in order to prepare the responses to Stratasys’ ‘925 complaint.

What Does This Mean?

The fact that Stratasys was willing to dismiss the claims related to the ‘925 patent at least suggests that they were worried about how Afinia responded to them. That might (but does not necessarily) suggest that there is some truth to Afinia’s counterclaims. At a minimum, right now we can be sure that the current Afinia printer will not be held to infringe the ‘925 patent.

However, at least right now Stratasys is free to use that patent against other printer manufacturers. That is why the Court’s decision on Afinia’s counterclaims will become so important. If the Court dismisses Afinia’s counterclaims, Afinia will not have an opportunity to invalidate the patent. However, if the Court allows the claims to go forward, it is at least possible that Afinia could succeed in invalidating Stratasys’ ‘925 patent. If the ‘925 patent was invalidated, Stratasys would not be able to use it against anyone.

In the original post about the Afinia response, one of the things that we did not know was how strong Afinia’s legal arguments where. As of now it appears that, at least in relation to the ‘925 patent, they were strong enough to convince Stratasys to dismiss the claims.

Unfortunately, we still don’t know how this lawsuit will impact the larger 3D printing industry and community. It increases the likelihood that Stratasys will not use its ‘925 patent against other companies, although does not guarantee it. Beyond that, we do not know if Stratasys’ patents will be upheld, overturned, or if the issue will be settled without resolution. Furthermore, we do not know what Stratasys intends to do with any patents that survive this lawsuit.

One other thing that we know is that the full trial date is set for Dec. 1, 2015. Between now and then we can be pretty sure to see a ruling on Afinia’s ‘925-related counterclaims. And it is at least possible that we see more rulings on other Stratasys patents and Afinia counterclaims.

The final thing we know is that the growth of desktop 3D printing continues. And that’s a good thing.

Today the ml5.js team unveiled a proposal for a new license to impose ethical use requirements on their open source machine learning libr...… Continue reading